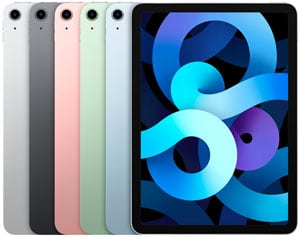 This iPad Air is powered by a six-core Apple A14 Bionic processor and a 16-core “Neural Engine”, has 4 GB of RAM, and is equipped with either 64 GB or 256 GB of flash storage. Other notable features include a new “Touch ID” authentication sensor built into the top button as well as support for the Apple Pencil 2nd Gen (A2051, MU8F2AM/A, US$129) that conveniently charges via a magnetic connection on the side of the device. It has a front-mounted 7 megapixel “FaceTime HD” camera that shoots up to 1080p video and a rear-mounted 12 megapixel camera that shoots up to 4K video.

In addition to a USB-C port, other connectivity includes 802.11ax (Wi-Fi 6) with HT80 with MIMO capability and Bluetooth 5.0. It has dual microphones and stereo speakers. Battery life is reportedly 10 hours of “surfing the web on Wi-Fi or watching video.”

Compared to its predecessor, the iPad Air 4th Gen (Wi-Fi Only) — and its cellular-equipped brethren — are a dramatic improvement and have more in common with the higher-end iPad Pro than its iPad Air lineage. With the removal of the Home button and the smaller bezels, they are physically smaller, but have a larger display. They also have a more powerful and advanced architecture, support more advanced external keyboards, use USB-C (instead of Lightning), and support the aforementioned more advanced Apple Pencil 2nd Gen and clever “Touch ID” sensor in the top button, too. 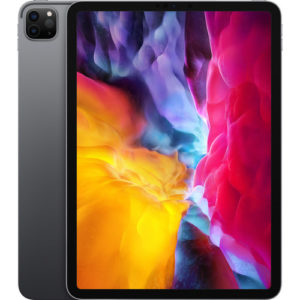 $329.99
All iPad (8th Gen) devices — including this Wi-Fi only model — are housed in white and gold colored, white and silver colored, or black...
Select options